Congratulations to Isabell Perez, this year's winner of the Carol McFeggan Scholarship.  At the Girls Softball Senior Night,
Isabell received a $500.00 scholarship in recognition of her school spirit, work ethic, and perseverance.

Auburn hosted and competed Saturday in the IHSSBCA Kickoff. Auburn A finished the preliminary rounds at 5-0 and advanced to the
championship pool.  After playoff play they were 4-1 and played a final around against IMSA A to win and take 3rd place with a 10-1 record.
The team consisted of captain Sinecio Morales, Alex Crowell, Coby Thammavong, Luis Angeles and James Shields.  Alex placed 2nd on the
All-Tournament team with 100 PPG.  The teams finish has earned them an entry into the PACE and NAQT High School National
tournaments in the spring. 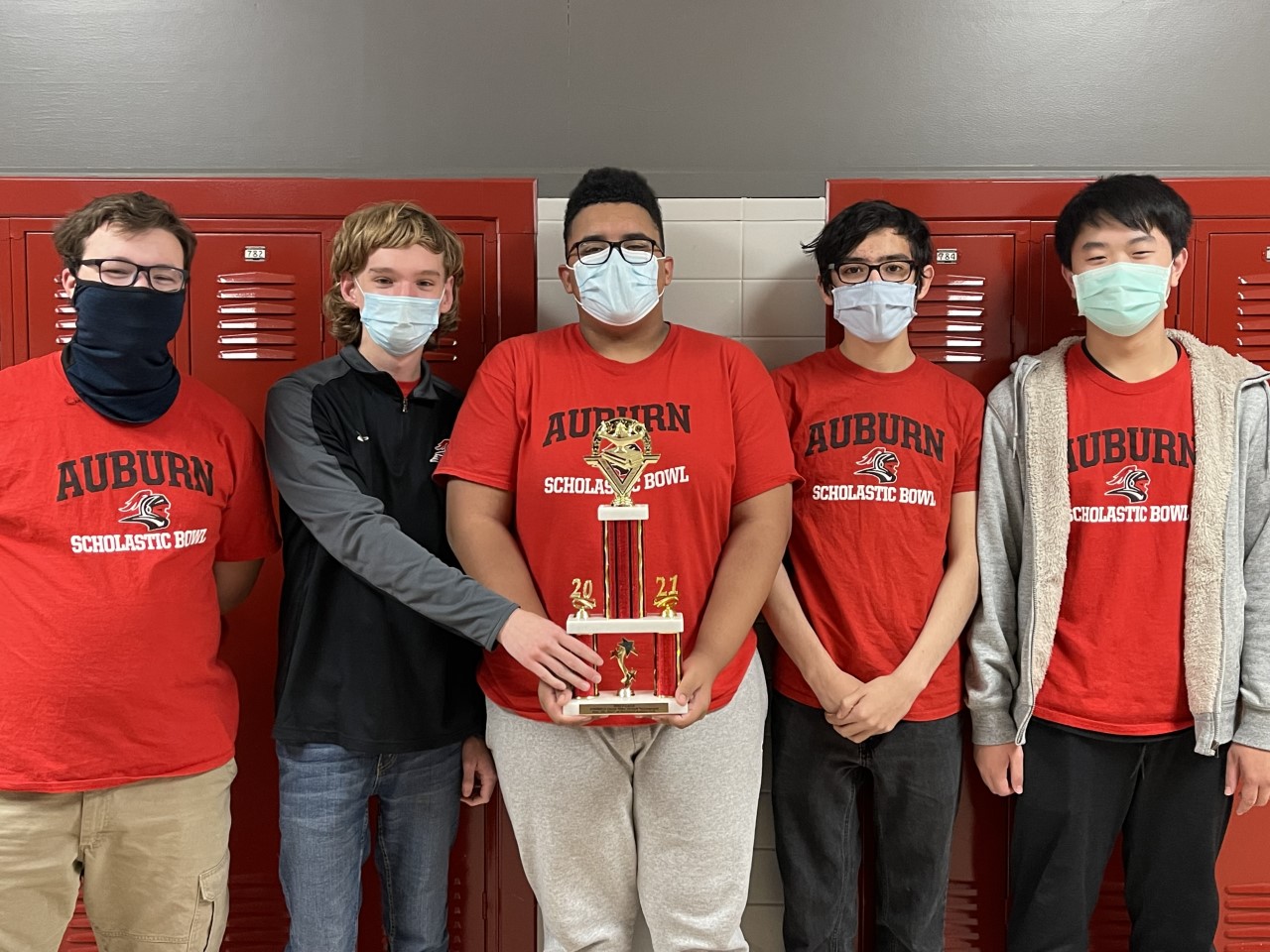 Auburn B finished the preliminary rounds at 4-1 and automatically advanced to the championship pool.
Auburn B consisting of captain Ashley Thammavong, Huan Lin, Brielle Rach and Ruth Mathew finished with a 7-3 record
and took 6th place out of the 30 team field.  They have earned an entry into the PACE National tournament in the spring.
Huan placed 8th on the All-Tournament team with 58 PPG.

Auburn C finished with a 3-2 record in preliminary play and earned a wild card spot to also advance to the championship pool.
Auburn C consisted of captain Massimo Chiarelli, Luke Snyder, Sebastien Roethle, Jeffrey Mathew and Will Rollins.
The team finished 11th out of the field of 30 teams.

Six of the Auburn Scholastic Bowl team members competed Saturday in the Scobol Solo event held at Carl Sandburg HS in Orland Park, IL.
This is an individual event where players compete one on one in seven matches in preliminary play. Competing members included
Sinecio Morales, Alex Crowell, Coby Thammavong, Brielle Rach, Huan Lin and Massimo Chiarelli.  Alex advanced to the
championship round with a 6-1 record and finished 3rd out of 104 competitors. Sinecio finished with a 5-2 record,
securing 12th and the rest of the team all finished with a 4-3 record.  Category ribbons for top scorers were won by
Alex in Other Fine Arts and Sinecio in Poetry.  Luis Angeles moderated at the event. 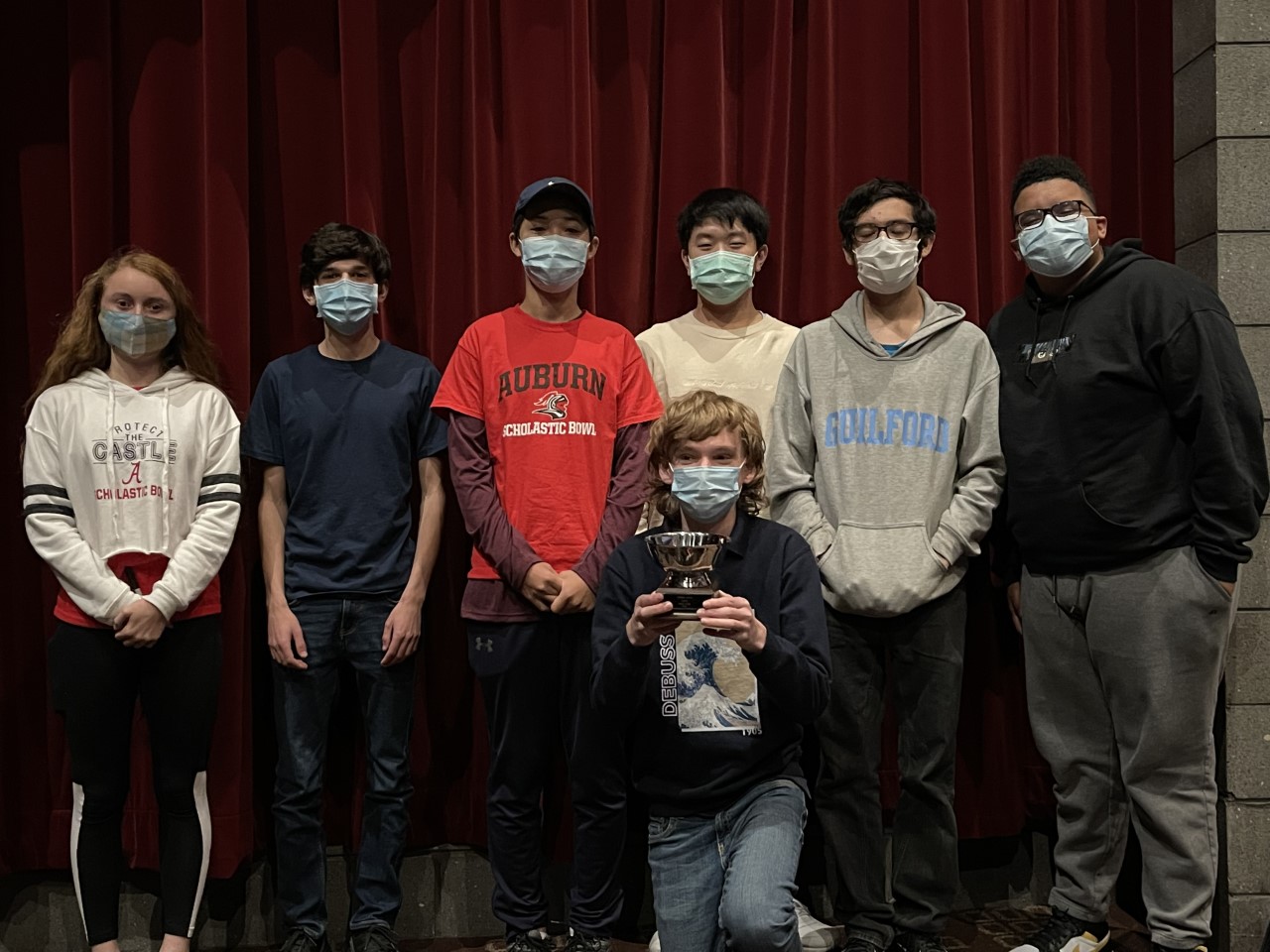 Auburn competed Sunday in the ACF Winter High School Mirror Online tournament on this college level set with other high school teams from around the country.

The team consisted of captain Sinecio Morales, Alex Crowell, Luis Angeles, Ashley Thammavong and Coby Thammavong.  Going into the 10th and final round Auburn was tied for the top spot with Detroit Country Day School who they played in this round, eventually taking second place with an 8-2 record.

Alex placed third on the all-tournament team with 47.50 PPG and Sinecio took the sixth spot with 40 PPG. Auburn led the tournament field in PPG and PPB. 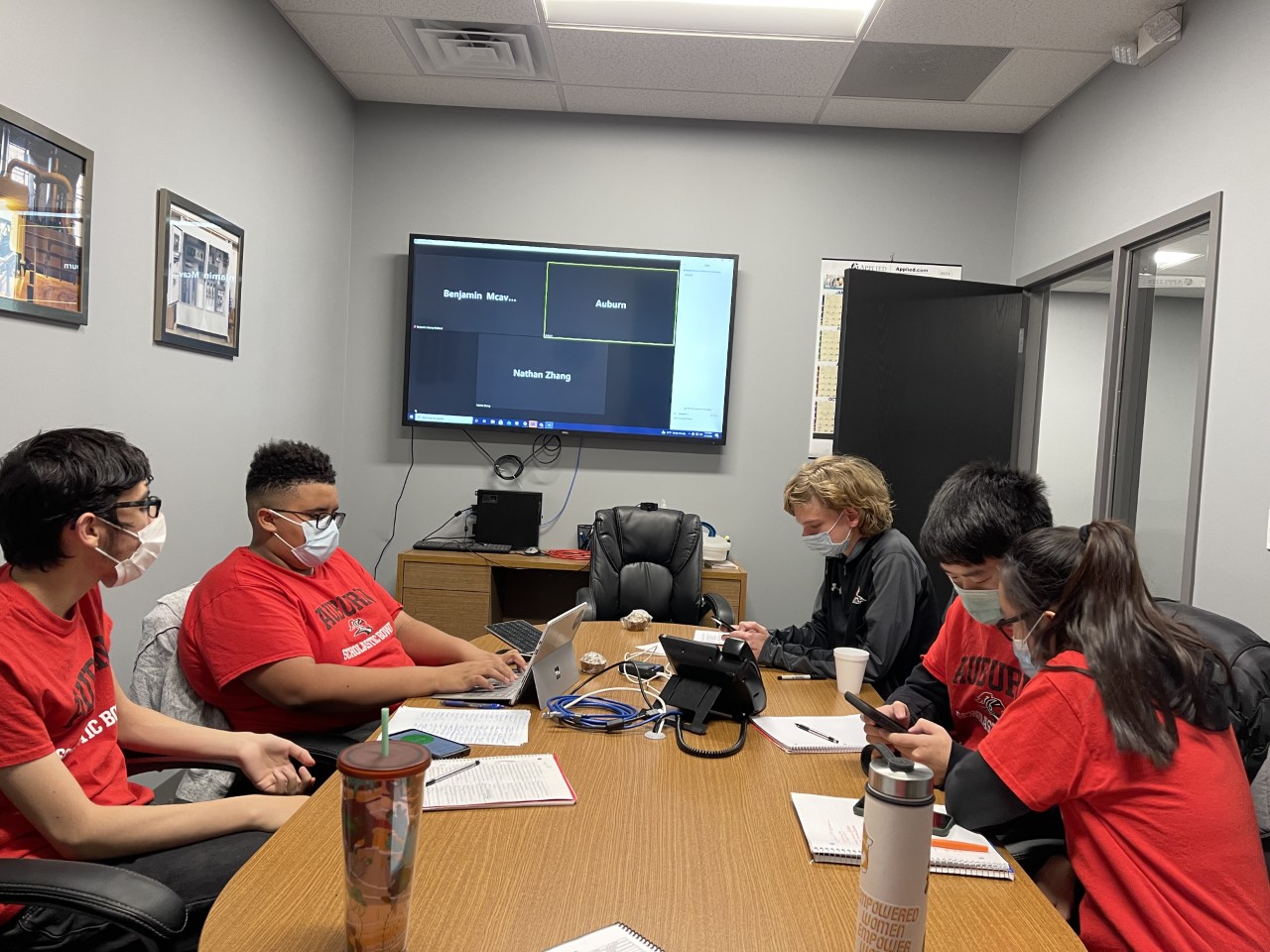 Both JV and Varsity came away undefeated.

Auburn competed Saturday in the IHSSBCA Novice tournament at Keith Country Day in Rockford.  The team consisting of
captain Massimo Chiarelli, Luke Snyder, Lillian Hanson, Aimar Lopez-Flores and Jeffrey Mathew finished 1st out of a field of 4.
Luke placed second on the all-tournament team with a 53.89PPG, Massimo was third with 40.56 and Jeffrey was ninth with 20.56.
Varsity players Sinecio Morales, Alex Crowell and Luis Angeles also served as moderators for the event. 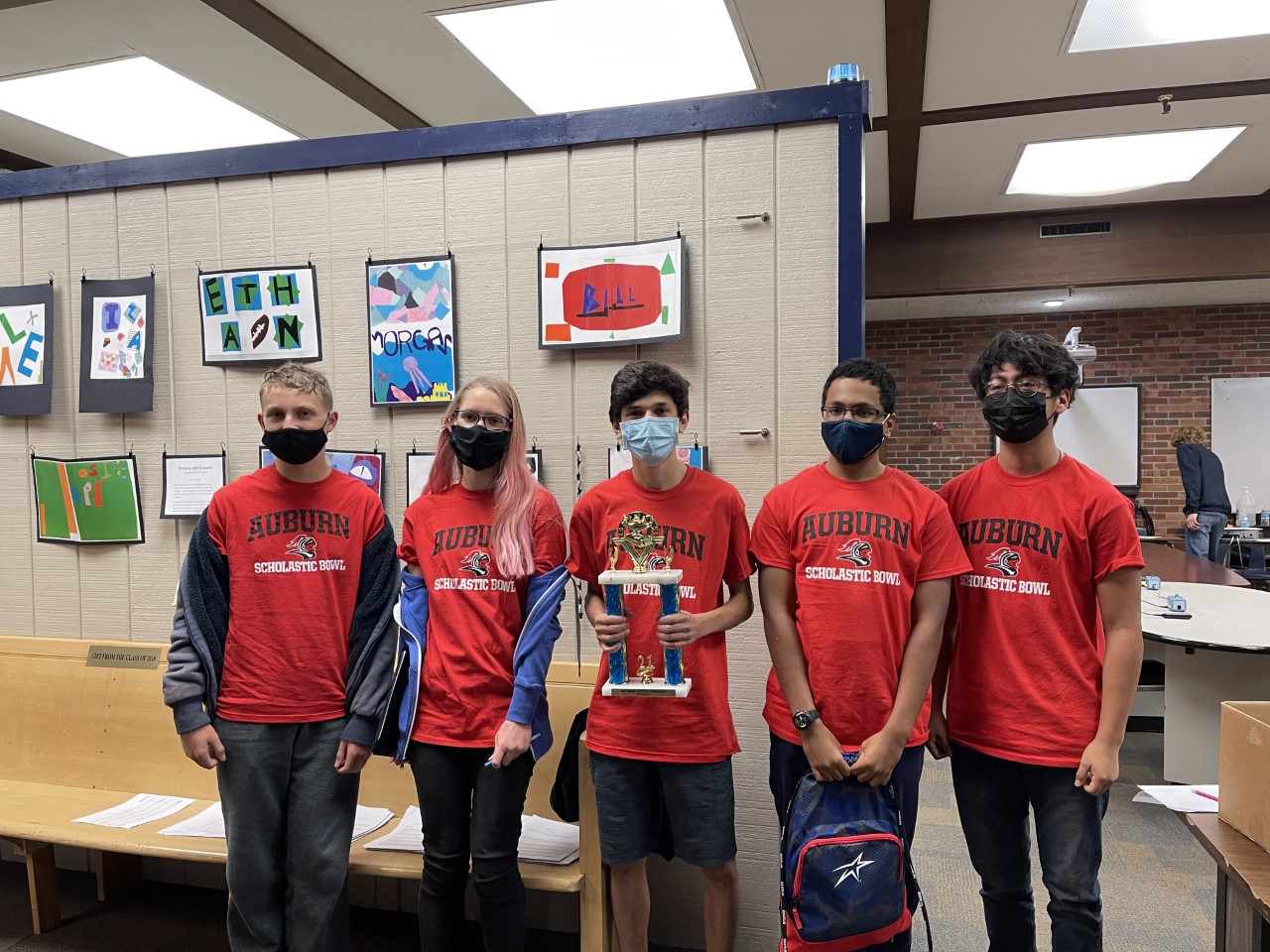 Auburn competed Saturday in the Falcon Kickoff in Wheaton, IL which was a Freshman/Sophomore tournament.  The team consisting of captain Brielle Rach, Huan Lin, Luke Snyder, Max Tatman and Jeffrey Mathew finished 3rd out of a field of 16.  Brielle placed first on the all-tournament team with a 70PPG.  Varsity players Sinecio Morales and Luis Angeles also served as moderators for the event. 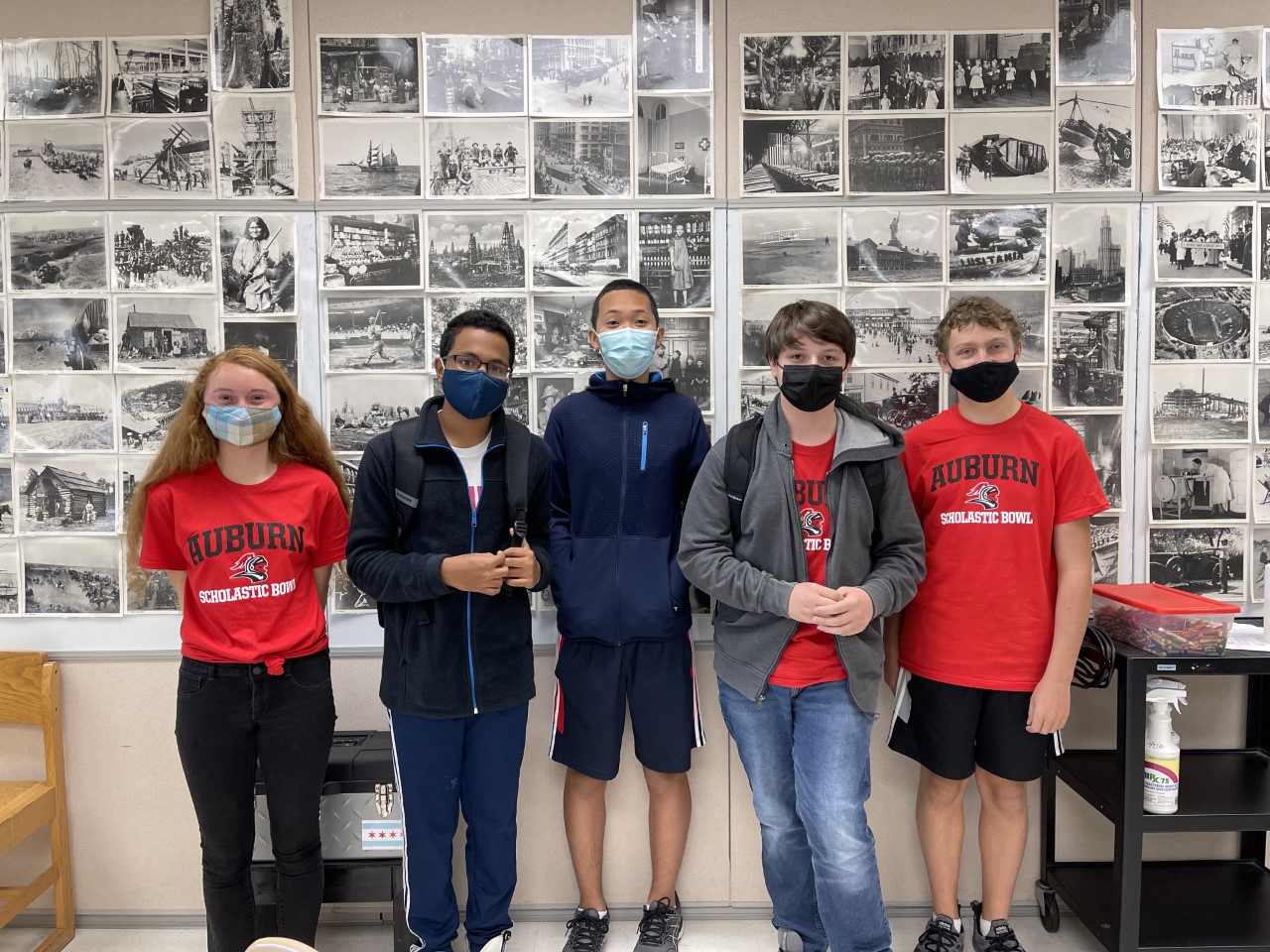